The following is taken directly from the Audio Fidelity website: 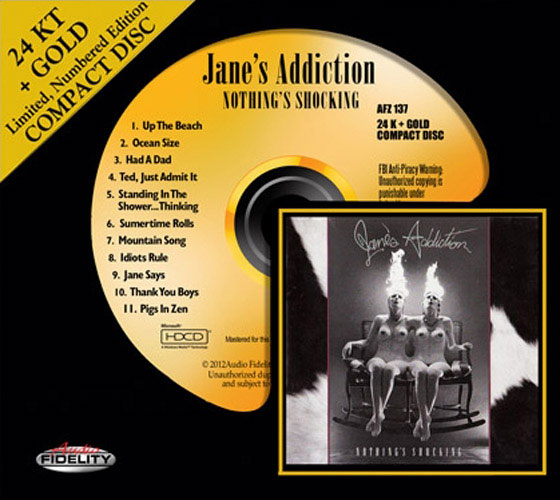 “Nothing’s Shocking is a must-have for lovers of cutting-edge, influential, and timeless hard rock.”      AMG

A classic, seminal work and one of the most original and unique records of its era, Jane’s Addiction‘s, 1988 Nothing’s Shocking successfully combined the sounds of ’70s arena rock and straddled the line between punk and post-punk. Nothing’s Shocking can sometimes be very gentle and soothing, and then, just like that, it’s aggressive and even ferocious. Elements of jazz, new-age and funk are interspersed throughout. The sound of the album is spacey, yet full; it’s abstract, yet at the same time it’s an album to which many listeners can connect . Jane’s Addiction created music that was simultaneously forbidding and weighty, delicate and ethereal – the sound is contemplative and plaintive, the sensibility is hardheaded and realistic. This was alternative before it became mainstream.

Like most great bands, it was not a single member whose contribution was greater: Dave Navarro lights the album on fire with incredible guitar work, Eric A‘s sturdy bass lines sit in a pocket and truly drive the band, Stephen Perkins is one of rock’s greatest and most powerful drummers, and, of course – the charismatic Perry Farrell‘s manic howls and unique voice alone would qualify this album as one of the all-time greats as his voice whines, yells, and echoes
like no other and Farrell also provided some of the best lyrics that can be found in alternative rock.

The album packs a sonic wallop and the performances often create a sense that it could all fall apart at any second, creating a fantastic musical tension. Such tracks as “Up the Beach,” “Ocean Size,” and one of alt-rock’s greatest anthems, “Mountain Song” explodes with a force. Also, “Ted, Just Admit It…” and the haunting “Summertime Rolls” make great use of changing moods and dynamics. An incredibly consistent and challenging album, other highlights included the rockers “Had a Dad” and “Pigs in Zen,” the horn-driven “Idiots Rule,” the jazz instrumental “Thank You Boys,” and the up-tempo “Standing in the Shower…Thinking.”  “Jane Says,” the acid-etched portrait of a heroin addict and probably the most sympathetic rock song ever written reached #6 on the Billboard Modern Rock Tracks. The album was ranked #309 on Rolling Stone’s “500 Greatest Albums of All-Time.” Nothing’s Shocking went Platinum in the U.S. is certified silver in the UK. In 2006, Q magazine placed the album at #32 in its list of “40 Best Albums of the ’80s”.

The album is produced by Dave Jerden and Perry Farrell

“…as much as any band in existence, Jane’s Addiction is the true heir to Led Zeppelin”      ROLLING STONE, October 1988