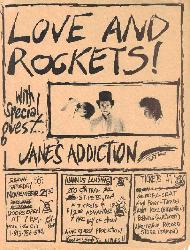 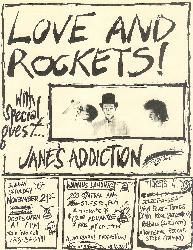 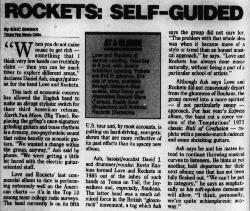 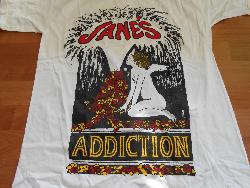 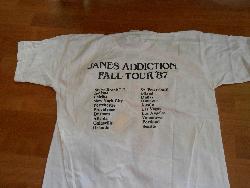 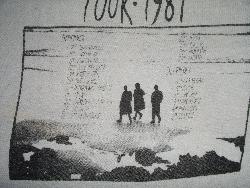 This tour was nominated for Club Tour of the Year but lost out to the Robert Cray Band.

Thanks go out to 'Jo$EChUngL8' for the shirt photo, Mike Davis from the Love and Rockets Facebook group for the second ticket scan, Larry Elmore for the 3rd ticket, and to Hapcibeno from the Bauhaus Gig Guide for the article scan, which we have the text for below:

"When you do not make music to get rich - something that I think very few bands can truthfully claim - then you can be much freer to explore different areas," declares Daniel Ash, singer/guitarist for the band Love and Rockets.

This lack of economic concern has allowed the English band to make an abrupt stylistic switch for their third American release, Earth.Sun.Moon. (Big Time). Replacing the group's once-signature grinding guitars and tense rhythms is a dreamy, neo-psychedelic sound that relies heavily on acoustic guitars. "We wanted a change within the group, anyway," Ash said by phone. "We were getting a little bit bored with the electric guitar-oriented stuff.

Love and Rockets' last commercial album to date is performing extremely well on the American charts - it's in the Top 10 among most college radio surveys. The band currently is on its fifth U.S. tour and, by most accounts, is putting on hard-driving, energetic shows that are more reflective of its past efforts than its spacey new album.

Ash, bassist/vocalist David J. and drummer/vocalist Kevin Haskins formed Love and Rockets in 1985 out of the ashes of such bands as Tones on Tail, the Jaywalkers and, especially, Bauhaus. The latter band was a much admired force in the British "gloom-rock" movement, a tag which Ash says the group did not care for. "The problem with that whole idea was when it became more of a style or trend than an honest musical approach," he says. "Love and Rockets has always done music naturally, without being a part of a particular school of artists."

Although Ash says Love and Rockets did not consciously depart from the glumness of Bauhaus, the group moved into a more spirited - if not particularly sunny - approach. For last year's Express album, the band cut a cover version of the Temptations' 1971 classic Ball of Confusion - replete with a pseudo-march cadence and some shrieking guitars.

Ash says he and his mates intend to continue throwing musical curves to listeners. He hints at yet another bold departure for their next album; one that has not been fully fleshed out. "We can't be put in category," he says as emphatically as his soft-spoken demeanor will allow. "I think, personally, we're quite schizophrenic anyway."