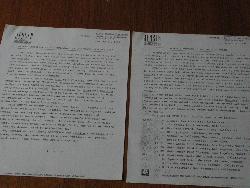 Up The Beach
Mountain Song
1%
Standing In The Shower... Thinking
Ted, Just Admit It...
Thank You Boys
Had A Dad
Idiots Rule
Bobhaus
Pigs In Zen
Ocean Size
Trip Away

The Wonderstuff opened. Frequently misdated as 5/11/89

"Nothing's shocking," Jane's Addiction has decided, and certainly the band was nearly right last night at the San Diego State University Montezuma Hall. The only rise the group got out of its fans was to their feet, as the near-capacity turnout took Jane's Addiction's gloomy glam standing up.

What was a little bit shocking, given its modest level of success elsewhere in the country, was the band's ability to pack in so many willing Southern Californians.

A recent string of shows in its native Los Angeles was completely sold out, and there were no tickets for last night's concert until an extra show was added tonight and the crowd was spaced out. (In addition to tonight's SDSU date, Jane's Addiction will inaugurate Iguana's nightclub in Tijuana on Friday.)

Making that success even more unsettling was a remarkably dreary, non-habit-forming performance. Executed with a maximum of competence and a minimum of inspiration, the music was generally a pointless ramble that only seemed to gain momentum when it approached a Led Zeppelinesque rumble.

The band's show was obviously designed to rely on singer Perry Farrell, but his appeal was nearly as incomprehensible as his vocals. Between songs, he indulged in witless humor, complete with drum rolls for inappropriate emphasis.

When Farrell did make some sense, he sounded for all the world like a post-punk Rod Stewart. If Jane's Addiction wants to follow in the gloriously trashy tradition of the New York Dolls -- right now the group is more like the L.A. Dulls -- surely Farrell could at least follow the lead of head Doll David Johansen (now known as Buster Poindexter) and ape singer Mick Jagger.

In contrast, the Wonder Stuff began the evening with a bracing set. While not wonders, this British quartet delivered tenacious thrash with surprising professionalism, and healthy doses of melody, recalling the psychedelic-era Beatles.

The largely good-humored, if consistently derivative, Stuff turned in a nice slow-churn version of John Lennon's "Gimme Some Truth" before descending into an aimless parody of the Sex Pistols.

Toombs is a free-lance writer.