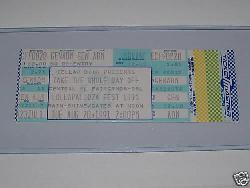 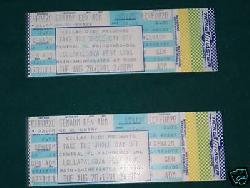 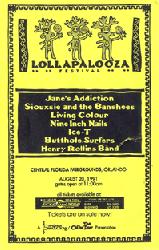 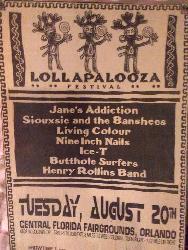 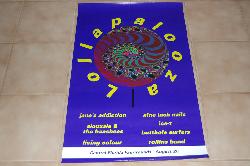 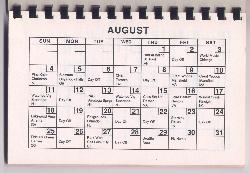 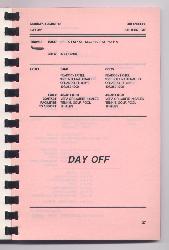 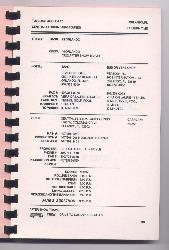 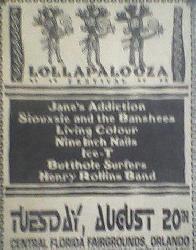 This was a Lollapalooza 1991 show.

There are 2 different audience audio sources for this show, both of which are a bit rough sounding and have lots of crowd noise in them. The clearer of the 2 sources is missing most of "Thank You Boys" and Perry's intro to "Three Days", plus has a quick cut in the intro of "Ocean Size". There is also a collage of the 2 sources. 87:15.
"Ocean Size" from this show was put out on a bootleg CD called The Gift (not to be confused with the similarly named film).
There is also an audience video of this show.

Before "Three Days", Perry talks about everyone getting along.

(before "Ocean Size")
"Hey, is anybody heading out towards the beach? Where do you guys surf at, Blowhole? Blowhole the spot? Is that your spot? [Dave plays intro to Ocean Size.] Hurricane surf, motherfuckers! Three, four!"

Thanks go out to Bev for the first ticket scan.

ORLANDO -- It had rain, mud, endless lines for beer and toilets, skirmishes with local police and eight hours of music that rumbled on despite a near riot. At times the Lollapalooza festival's stop here Tuesday -- which drew 27,000 to the Central Florida Fairgrounds -- was an uncanny `60s flashback. It came close, but it was not a new- rock Woodstock of the `90s, and far from a milepost for an entire generation.

But it was, without a doubt, the outdoor rock event of the year, a seven- band, 21-city mega-tour that attemped to integrate art, music and politics in a daylong, multimedia swirl.

Lollapalooza wins points for nerve and attitude, and for the sheer logistical brawn required to orchestrate a successful outdoor festival and recreate it every two or three days for more than a month.

Gone are the days when performers used common equipment and just plugged in, tuned up and played on into the night. Headline act Jane's Addiction and most tourmates, especially industrial dance rockers Nine Inch Nails, supplement their sound with complex electronic effects unheard of 20 years ago at Max Yasgur's farm.

Showgoers used to massive arena-packing concerts found they could enjoy powerful sound in the freedom offered by the open field stretching a quarter- mile in front of the stage. They could join the whirlpool of sweaty bodies pressed against the base of the stage "in the pit," or relax in an open patch of wet grass, sharing sheets of plastic with temporary neighbors.

For part of the crowd, the laid-back attitude was short-lived. Frustrated by lines stretching 200 deep and a wait of more than an hour, a thirsty mob rushed the beer stand about halfway through the show. "I had no control over my body. Where the crowd moved, I moved," Grace Korosec, 24, of Daytona Beach said.

Orlando police tried to speed the lines by ordering harried concession workers to limit sales to two beers per person instead of six. The change angered the crowd and prompted police to call in mounted units to quell the disturbance.

The long day began without a hitch at 2 p.m., under overcast skies and a light rain. Heavy traffic caused most people to miss the brief opening set by hard-core punk singer Henry Rollins, but gates grew crowded during the next act, the Butthole Surfers.

Both acts are veterans of the underground music circuit that spawned most of the performers, but many showgoers felt rapper Ice-T was a curious inclusion to the lineup. Their questions were answered forcefully by Ice-T's powerful set of rap and blistering heavy metal, both part of the "community of rock `n' roll," as Ice-T explained to cheers. He drew new fans with a duet with Rollins on There Goes the Neighborhood, and the venomous Copkiller, dedicated to Los Angeles Police Chief Darryl Gates.

Their heads spinning from Ice-T, the crowd set bodies moving to the dance grooves of Nine Inch Nails. Lead singer Trent Reznor's impassioned performance inspired a frenzy among pit-dwellers, to whom Reznor paid the ultimate compliment: "You guys are (expletive) rowdy. Cool!"

Living Colour was probably the most well-known of the performers due to wide exposure on MTV, and punk pioneers-turned-dance rockers Siouxsie and the Banshees were the oldest act on the bill. Neither deviated far from a basic formulaic delivery of their hits, although Siouxsie Sioux quipped the show's best line: "I've got to do something about this smiling -- this tour's ruining my reputation."

Jane's Addiction frontman Perry Farrell reserved the most time for preachy stage patter, as probably was his right as organizer of the event.

He called for "unity" in the face of oppression and ripped the beer-stand mob, although the incident was four hours old by the time he took the stage. The band's set, however, stayed potent despite the monologue.

Some will not remember much of the show: Paramedics reported three drug overdoses among 40 people treated, "about the same as a Grateful Dead show," Fire District Chief Bill Sunday said.