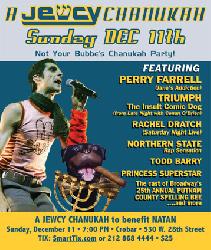 Show billed as "A Jewcy Chanukah." Thanks go to Turbo for the head's up on this show.

Channeling the electricity of the new Jewish movement, a stellar roster of Jewish artists will headline an historic concert bridging the best of Jewish pop culture with the Jewish legacy of charity.

Produced by young Jews, for young Jews (and those who love them), the first annual Jewcy Chanukah is poised to become a new holiday tradition for New Yorkers seeking something more ?Jewcy? than dreidel-spinning contests or Matzoh Balls.

Starring the Semitic talents of:

Pre-show begins at 7 p.m. where Perry Farrell from Jane's Addiction will be DJing