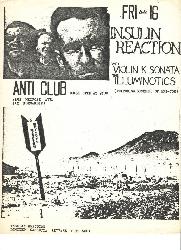 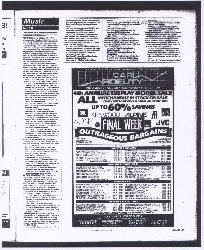 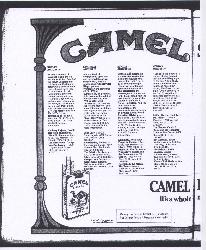 This show is the earliest known show billed as 'Illuminotic'.

This show was Eric Avery on bass, Perry Farrell on vocals and Aaron Sherer on drums.

perry and i did play early shows as a duo. not many. dont know what we were thinking. i would sometimes play bass, sometimes a chemical drum, while perry sang through all his fx units. improvisational. in fact, 'pigs in zen' was born when i started to play a bass line to what i could hear of a drum beat coming through the house speakers as we stood onstage waiting for the club to turn off the music. maybe ten people there. one of whom was biff sanders (then in a band called four way cross) who i would years later do polarbear with.

This show is also mentioned on page 50 of Brendan Mullen's book Whores.

Perry Farrell: Between Psi Com and Jane's I'd go out there and improvise with just a drummer or with Eric on electric bass and I'd holler through my vocal effects box. I'd do off-the-top-of-my-head lyrics dressed in a see-thru unitard. It was a big hit at Lingerie, the Anti-Club, Charlie's Obsession.... I think we may have billed ourselves as the Illuminotics, or the Illuminati....

Perry Farrell: At the Anti-Club you could be very experimental, twisted, and weird. I was using delays, using one drummer and myself and then Eric. We'd do little pieces like that. It was all about art. We had nothing to lose, all to gain. We were having a good time. We could get booked in and have a party and that's it. It's a success.