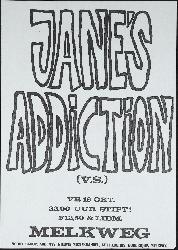 For some reason, the venue for this show is frequently listed as 'Paradiso' but it is apparently just 'Melkweg'.

Thanks go to Gavin from SDW for the article. Here is the translation as provided by 'Krakle':

Anything can be expected from Jane's Addiction, that includes the cancellation of a concert. The exact reason is yet unknown but there was no show on October the 7th, the day that the concert should've taken place. And since singer Perry Farrell, on several occasions, has proclaimed to break up Jane's Addiction after this tour, my hope to see the band live in action had shrunk to almost zero.

The more delighted I was when a message followed that Jane's Addiction had decided to perform in Amsterdam after all, on October 19th. And indeed, it happened as well. In a nicely filled Milkyway, despite the lack of publicity for this apparent movement. Although, in all fairness, it has to be said that a large number of the crowd existed of tourists who'd just decided to take their chance and walk in. However, those present were witnesses of Jane's Addiction in top form under the command of the previously mentioned Farrell. For he IS Jane's Addiction, with all due respect to the other three greatly skilled musicians.

Farrell has that certain 'something' that makes a singer a great front man. Call it appearance, call it charisma, Farrell's got it and he's got it in plenty. Dressed in a hideous flower dress from the sixties, accompanied with a clashing green scarf, shiny rubber gloves that reached over the elbows and hyper modern, though just as ridiculous, cycling shorts he had the Milkyway in his hands for eighty minutes and guided his band through the not so childish setlist at the same time.

And shit, was he incredibly good in voice. Apparently without any efforts he even reached the highest registers, surpassing his self during the absolute highlight of the evening, 'Summertime Rolls', from 'Nothing's Shocking'. Come to think that we had even just been served the just as emotional 'Three Days', where Farrell had pulled out a 12-string guitar that unfortunately wasn't always clear in the mix.

Contact with the crowd didn't seem to interest him and during the whole show he seemed to be in his own little world where we were all welcome. Only once he turned to the crowd. That happened with a small preach halfway through 'Pigs in Zen'. Moral of the story: 'Fuck first, think later'.

That was it for us. No 'goodnight', no 'thank you' or even just 'see you'. No, as cold as ice Farrell & co. walked off the stage after just one encore that was a lovely combination of 'Ted, Just Admit It' and 'Mountain Song'. Leaving a hypnotised crowd that was still catching their breath after the just gained experience because one can easily describe Jane's Addiction like that; an experience. And what kind of an experience!

It would be a shame forever if Farrell would suit the action to the word and let Jane's Addiction die a quick death indeed. Shame forever.