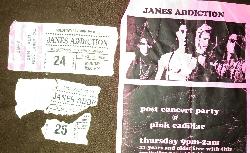 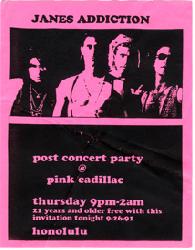 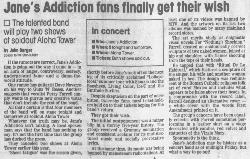 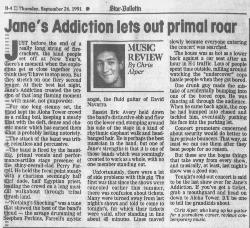 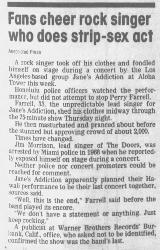 Up The Beach
Whores
Standing In The Shower... Thinking
Ain't No Right
Thank You Boys
Three Days
Been Caught Stealing
L.A. Medley
Then She Did...
Mountain Song
Stop!
Ocean Size
Chip Away

The 2nd date of a 2 night stand at the Aloha Tower, this was the final show that the classic lineup of Jane's Addiction played together until reuniting in 2008.

The most common recording of this show is soundboard audio which was put out by the bootleg company KTS on a CD called Last Fixx. 63:52. The quality is quite good, though the vocals are too loud in the mix, occasionally distorting.

There also exists a longer soundboard version (69:31), which includes a few minutes of Perry's farewell speech at the end which were omitted from Last Fixx.

There is also a decent audience audio recording which was put out on a bootleg CD called Last Show.

There are a couple known amateur video recordings, both decent quality, but somewhat incomplete. The longer of these sources (62 minutes) was actually filmed from the stage by friends of the band, and includes some backstage post-show footage shot by Stephen Perkins.

Perry got naked during the show, performing "Then She Did", "Mountain Song", and "Stop" nude. Stephen performed these songs nude too, though he was hidden behind his drum set most of the time.

"Some people end up working for a bank. Some people work out to be scientists, like my friend Rob. It's my job to rock that shit! Experience it, live through it, and tell you all about it. I'm here to tell you that I've had a very, very big dick. Yeah, man. Go for it. Nothing beats a hard on, you know that. Yeah, man. Wanna hear about last night? Nah, nah."

"Go for it, man. Death-defy and live to tell your friends. It's a hell of a fucking rush."