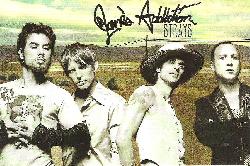 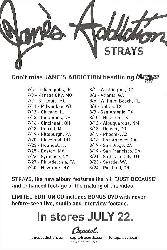 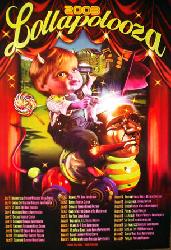 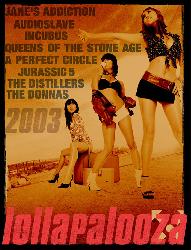 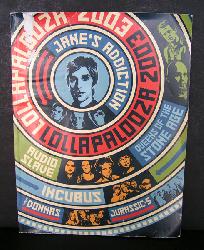 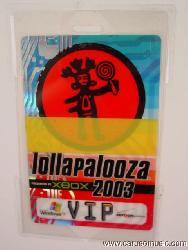 Hyperfit and fueled perhaps by rebirth, the band capped a day of otherwise blase music.

Farrell pranced and shimmied about the stage as Navarro struck rock-guy poses and riffed through the back catalog, and scantily clad dancers writhed on the chrome industrial setup. Ocean Size, Mountain Song and dynamic others featured the push-pull drama that so many latter-day hard-rock bands try to emulate and fail to execute.

Sixty minutes from Jane's Addiction was a perfect set length. For bands such as Queens of the Stone Age, the Donnas and Jurassic 5, abbreviated sets in sparsely filled amphitheaters make for forgettable fare.

These bands do well in clubs, where barriers between audience and performer are nil, the sun doesn't shine, the atmosphere is more their style and the people who have paid to see them are there to see only them.

Audioslave -- bassist Tim Commerford, drummer Brad Wilk and guitarist Tom Morello, formerly of Rage Against the Machine, and former Soundgarden singer Chris Cornell -- was louder than the Old Testament God's wrath. The band's songs from its self-titled record were as muscular as the usually shirtless men who created them.

Cornell's voice either makes or breaks Audioslave for listeners. One either enjoys lung power strong enough to topple buildings or one does not.

Cornell's feral squall rarely gave anybody a break Sunday. But when the band behind him was playing swaggering hard rock, such a voice was perfect for delivering soul-tortured and soul-searching lyrics.

Lollapalooza could have been chopped to two acts: Audioslave and Jane's Addiction . Sure, a person "gets more music for his dollar" at Lollapalooza and any other daylong fest, but like the person who pays 69 cents for 64 ounces of watery coffee, is this really a bargain?

The Distillers were the headliners on the second stage, performing in front of the image of a naked woman being crucified.

Their music was just as gruesome, a dirty punk-rock concoction with grunting, rasping and occasional singing from Brody Armstrong. She and her band know how to rock, but their sound isn't varied enough, and her vocals are off-putting.

Cave In performed melodic, guitar-riff-heavy epics in a style best-described as an "emo" update to'70s progressive rock. The set was one of the best of the second stage.

The stage's highlight was MC Supernatural, an Indiana-born rapper who performed a set almost wholly comprised of freestyling. In a routine called Anything, "Supernat" climbed into the crowd and asked people to hold up items for him to rap about. He worked his way across the front of the audience, grabbing lipstick, cellphones and condoms, never taking a breath as he came up with lyrics about each item in seconds.

Columbus' Miranda Sound opened the day, but its melodic punk sounded out of place removed from the High Street clubs that bred it.