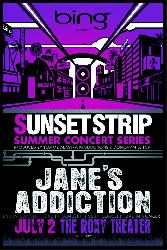 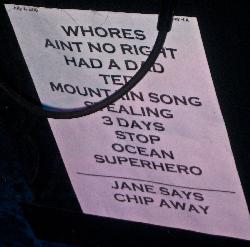 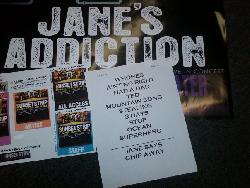 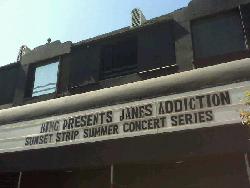 While the song Superhero was listed on the printed setlist, the band did not actually play it.

We in Jane’s Addiction have done several intimate LA shows over the past year or so… Little places with 100 or so tickets set aside for the fans. It was tough for a lot of fans to get in even after waiting all day for entry. With all of our friends and family in LA, it’s sometimes hard to accommodate everybody. Well it looks like we are doing another show and we have decided to make this show an event that is mainly for the fans. We are going to strip back the guest list, inviting only our immediate loved ones and let the majority of tickets be made available to the people who have given us so much over the years, the fans.

This show will be in Hollywood on July 2. Ticket information will be made available soon.

Perry revealed the venue information with the following:

Jane's is heading up to the Sunset Strip. Returning to the location of our first recording; The Roxy this Friday night. I'm serious. There will be some tickets given away through the week. I will get more details tomorrow. I am looking for a local performance artist to startle my friends.