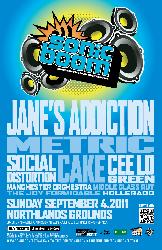 This show was originally planned to take place at the Northlands Grounds, but was moved indoors to the Edmonton Expo Centre due to concerns about weather.