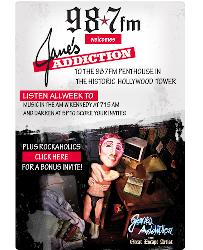 Just Because
Ain't No Right
Underground
Had A Dad
Stop!

Private show hosted by 98.7FM.  The only way to get tickets was to win them through a promotion being run by the radio station.  The band was interviewed backstage before the show.

Thanks go out to vikkivale for the heads up on this show!