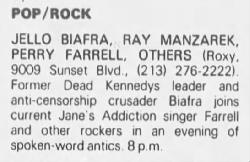 Thanks go out to David Michael Brandt for the ticket stub scan.

Daily News of Los Angeles (CA)
March 25, 1988
OUT ON THE TOWN
SPOKEN-WORD STARS WILL BE BENDING EARS AT THE ROXY
Author: Craig Rosen

A few years ago, it seemed as if just about every musician in Los Angeles was doubling as a spoken-word artist. These days, the city's spoken-word scene isn't as high profile as it was - but it's not dead.

On Tuesday at the Roxy Theatre, 9009 W. Sunset Blvd., West Hollywood, the word will rule once again as an all-star lineup of spoken-word artists takes over the club. Included in the show will be former Dead Kennedys singer Jello Biafra, whose "No More Cocoons," a two-record spoken-word collection, was recently released on Alternative Tentacles; former Doors' keyboardist Ray Manzarek backing poet Michael McClure; author Danny Sugarman, who penned the Jim Morrison biography "No One Here Gets Out Alive," reading from his forthcoming novel, "Wonderland Avenue: Tales of Glamour & Excess"; and Jane's Addiction front man Perry Farrell, whose writings have been featured in Contrast magazine.

Sunday, at Los Angeles' latest hot spot, the John Anson Ford Theater, 2580 Cahuenga Blvd., Hollywood, a variety of acts team up for a benefit for Amnesty International/U.A.N. Food First - Impart, billed as "Deliver the News." Headlining the show are recent British music-weekly cover stars and punk-funk assault units the Red Hot Chili Peppers and Faith No More. Legal Weapon, Thelonious Monster, the Babylon Warriors, the Electric Spanking Monkeys and others are also scheduled to perform at the all-day concert, which begins at 11 a.m.

The Boys Choir of Harlem, directed by Walter Turnball and accompanied by guitarist Kenny Burrell, performs Saturday at El Camino College's Marsee Auditorium, 16007 Crenshaw Blvd., Torrance, and Monday at UCLA's Royce Hall. The choir is set to perform a diverse collection of material including works by Kool & the Gang and Mozart.

Over at the Catalina Bar & Grill, 1640 N. Cahuenga, Hollywood, the Steve Lacy Sextet kicks off a three-night stand tonight.

On the rock front, They Might Be Giants, an eclectic New York-based duo, makes its local debut at Club Lingerie, 6507 Sunset Blvd., Hollywood. The duo, which has had hit videos with "Put Your Hand Inside the Puppet Head" and ''Don't Let's Start," has also recorded a tribute for Minneapolis' favorite sons titled "We're the Replacements."

At one of Hugo Largo's local appearances, the band performed a cover of Bon Jovi's "Wanted Dead or Alive" that blasted away all of the song's artsy pretensions. The band, consisting of singer Mimi Goese, two bassists and an electric violin player, is truly one of a kind. Saturday, Hugo Largo performs at Alcohol Salad, 912 S. San Pedro St., Los Angeles. Opening the show is Downy Mildew, whose "Mincing Steps" album, the follow-up to last year's wonderful ''Broomtree," was recently released on the Texas Hotel label.

Obscenity charges against him had just been dropped and he spoke passionately about the importance of freedom of speech: Jello Biafra-poster boy for the anti-censorship movement.

Watching Biafra, 29, returning Tuesday to top a night of spoken-word performances before a capacity crowd of 500 at the Roxy, there was little to indicate that he had been embroiled in that much-publicized courtroom drama.

It was business as usual for the former leader of the Dead Kennedys and 1979 San Francisco mayoral candidate. And that was both good and bad.

On one hand, it was nice to see that Biafra-an intense, animated performer-was not bent on exploiting the notoriety that resulted from the trial. (The charge involved distributing a painting by Swiss artist H.R. Giger depicting male and female genitalia, a poster of which was included in the band's 1985 "Frankenchrist" album.)

Rather than come on as the self-appointed conscience of a generation, Biafra made a point of encouraging members of the highly supportive audience to reach their own conclusions, even berating them several times for being willing to go along with anything he said.

Biafra is still a man on a mission. It's just that the mission is much the same as before his boost in fame: to battle against complacency and for free thought.

Also on the positive side, there was little shock-for-shock's-sake in this show. Though including scattered elements of profanity and brutality, Biafra's language and imagery was quite mild compared with a Robin Williams performance, let alone one by Sam Kinison.

Yet Biafra hasn't used his higher profile to move beyond broadsides he's been hurling since emerging with the Dead Kennedys a decade ago.

At the Roxy, he ranted about the usual easy targets-Tipper Gore (the Parents Music Resource Center co-founder whose Beverly Hills speech earlier in the day had been picketed by about 200 demonstrators, including Biafra), Pat Robertson, Ollie North, Madison Avenue, punk and heavy metal deprogrammers.

Biafra is less a satirist than a commentator, and the fact that he read most of his lines gave the performance a clunky, programmed air. What would have been noteworthy as an off-the-cuff observation seemed ponderous as a written diatribe.

Encouraging, though, was the fact that the audience-most apparently in their 20s-responded to Biafra's give-and-take manner. What started as a very inappropriately devotional follow-the-leader event quickly became more freewheeling, with the best moments coming during some quick, spontaneous exchanges between performer and members of the audience.

And though Biafra was the nominal headliner of the evening, the real star seemed to be the ghost of the Doors' Jim Morrison, who is more responsible than anyone for rockers taking themselves seriously as poets.

And that, more than Biafra's presence, directed the tone of the evening. People squealed and applauded every time Morrison's name was dropped by Sugerman or the duo of poet Michael McClure and ex-Doors keyboardist Ray Manzarek (who offered tedious post-beat poetry and light, jazzy piano, respectively).

An opening presentation by Jane's Addiction singer Perry Farrell, which had nothing to do with Morrison, was a different matter. Using a flat conversational tone on a piece revolving around the word trauma and punctuated by a series of phone calls, Farrell displayed a sharp eye for detail and sense of timing.

Fortunately, though, Sugerman had the courage to tackle the morbid romance many young people have with Morrison (who died of a heart attack at age 27 in 1971), and his memoirs serve as a chilling cautionary tale against excess of all kinds: