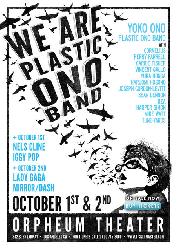 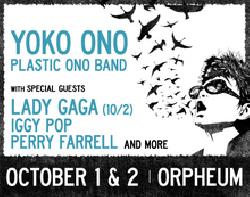 Live review: Plastic Ono Band and friends at the Orpheum

Near the end of two nights of tributes to herself, Yoko Ono lay on top of a grand piano, Lady Gaga by her side. The 77-year-old legendary widow uttered her signature ululations, while the 24-year-old pop star wailed in that big voice of hers.

For the first time in an evening of poignant, strange and thrilling star turns, Ono seemed slightly disarmed and tickled -- like at last she'd again found a collaborator equally capable of making mischief and merry. At the end, they lay in each other's arms, two notorious provocateurs in a surprisingly tender embrace -- a pose not unlike that snapped by Annie Leibovitz 30 years ago, when a naked John Lennon cuddled his wife, Ono.

The two songs by "Yoko Gaga" -- as one fan shouted, to Ono's amusement -- capped an almost three-hour (including intermission) Orpheum Theatre show Saturday that ranged from sublime to self-indulgent. The evening was billed as a performance by the Plastic Ono Band, the amorphous supergroup Lennon founded in 1969. Sean Lennon has taken over his dad's role as musical director; looking increasingly like his father, he led a gifted psychedelic funk band -- including the musicians Yuka Honda and Cornelius -- and supported a diverse array of talents, such as introspective actor Vincent Gallo and New York noisemongers Kim Gordon and Thurston Moore. The stage abounded with women and Asians, evidence of the integration Ono pioneered.

Coming on the eve of celebrations of what would have been Lennon's 70th birthday, the unstated but obvious goal was to give the woman whom John loved but so many Beatles fans hated her artistic due. The Gaga moment may have been Ono's ultimate triumph: The Lady who emphatically pushes many of the same buttons Yoko does saluted the woman whose pioneering feminism helped make her mega-success possible: "Thanks for being so brilliant and such an inspiration to so many women."

But the show also provided ammo for Yoko haters. Gaga's avant stunts succeed because she possesses enormous musical talent, particularly with her powerful voice. Ono, not so much.

The evening launched with a 15-minute film bio of Ono. (Somewhat creepily, Paul McCartney, with whom Yoko has often had her disagreements, has also been opening his shows with a film bio.) Then the woman of the hour came out, looking fit in a black pantsuit with an angular top hat astride her short hair. She, er, sang songs old and new, including her post-Lennon disco hit "Walking on Thin Ice."

When Ono did her vocal improvisations with Ornette Coleman's band in '68, or with Sean in the '90s noise group IMA, they made sense as experimental music. But those "yeow"s and "ai-yi-yi"s can be a strained fit for pop styles, even psychedelic funk jams. The first hour was unconvincing.

It's too bad Ono doesn't have conventional vocal chops, because the show's second half proved she can write some pretty great conventional songs, along with the unconventional. A smorgasbord of artists captured her range: Actress-author Carrie Fisher found the show-tune melody in the feminist parable "What a Bastard the World Is." Experimental duo Tune-Yards de- and re-constructed the hippie anthem "We're All Water." Ono demonstrated her ageless ability to adapt to new forms, as she provided the sounds of a woman giving birth while RZA rapped a chilling version of his song "See the Joy."

Lennon and Harper Simon played a sweet, lovely acoustic duet of John's 1971 tribute to his wife, "Oh Yoko!" As Simon said, "There's not a lot of sing-along moments in this show, but this is one."

The concert ended with another one, an all-aboard rendition of "Give Peace a Chance." Guests contributed their own versions of the protest song's verses. Gaga repeated a chant of "gays in the military." By this point, the baton had been passed to the Lady, in her silver wig and bejeweled catsuit with its see-through behind. "No bottom, Lady Gaga, that's bottom for me," the suddenly prudish RZA critiqued in his "Peace" verse, to Gaga's evident annoyance.

No worries, Lady Gaga: As Ono could tell you, change breeds haters. And at least today's pop Jezebel doesn't have to wait 40 years for the world to kiss that bottom.