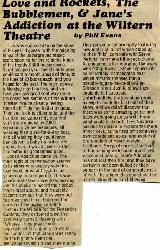 To close its U.S. tour, Love and Rockets stops at the Universal Amphitheater Sunday and the Wiltern Theater Monday.

The British trio races through a vigorous set dominated by frenzied rhythms and psychedelic-tinged melodies. In addition to songs from its latest album, "Earth-Sun-Moon," The band draws on numbers from its 1986 LP, "Express." The trio is supported by the Mighty Lemon Drops on Sunday and Jane's Addiction on Monday.

Since Morris Day recently softened his playboy image for a domestic role, his concert tonight at the Universal Amphitheater should prove interesting.

In the past, Day has been all pomp and flash, but his latest album, "Daydreaming," shows him to be vulnerable and quite the romantic. He still retains some of the fun-loving cheek that made him a leading figure in the Time and a scene stealer in Prince's "Purple Rain," but concertgoers should not be surprised if they find a more revealing, realistic Day instead of a polished, cool character.

Treading in his brother's footsteps, Will Sexton appears tonight at the Roxy Theater in Hollywood and Saturday at Bogart's in Long Beach.

Backed by his group, the Kill, the younger sibling of Charlie Sexton brews up a storm, cranking out high-energy rock 'n' roll. Will and the Kill is out promoting its self-titled debut album, which includes such straightforward tunes as "Heart of Steel," "Teach the Teacher," "Breakin' All the Rules" and "Rocks in My Pillow."

The Celebrity Theater in Anaheim hosts "An Evening With Natalie Cole" Saturday. A performer since the '70s, Cole recently chalked up a new audience with the dance hits, "Jump Start" and "Pink Cadillac," a remake of a Bruce Sprinsteen song. Although her show focuses on her latest album, "Everlasting," her new followers may receive a pleasant surprise as the concert takes on a warm and soul-oriented direction.

Cole's strength always has been tender ballads in which her vocals shine with heartfelt emotion. The singer, fully aware of this, leans the set toward slow-tempo numbers. The performance starts at 8 p.m.

The English duo So makes its Los Angeles debut Monday at the Roxy.

Vocalist-guitarist Mark Long and multi-instrumentalist Marcus Bell create moody synthesized pop that's catchy but not very remarkable. The band is on tour to support its debut album, "Horseshoe in the Glove," which features the hit single, "Are You Sure."

Following the success of her platinum-selling album, "Heaven on Earth," Belinda Carlisle hits the road with a show Wednesday at the Universal Amphitheater.

The former Go-Go's singer runs through a collection of pop-rock tunes that lose their clinically clean production live. Carlisle's songs emerge in raw forms, while her sweet, clear vocals become raspy and gritty. It gives her concerts a rough and rock-oriented edge, fueling numbers such as "Mad About You," "I Get Weak" and "Heaven Is a Place on Earth" with vitality. The show opens with the rhythmically inclined Bourgeois Tagg.

The British quartet Then Jerico releases its debut album, "First (The Sound of Music)," this week on MCA Records.

The 10-track LP offers melodic rock that is similar to early Simple Minds. Then Jerico fleshes out its sound with dynamic rhythm guitars, heavy keyboard lines and dry vocals. Some notable cuts are "Let Her Fall," "Blessed Days," "The Motive," "Muscle Deep," "A Quiet Place (Apathy and Sympathy)" and "Prairie Rose," a cover of the Roxy Music classic.

Coming out Tuesday is Three O'Clock's first release for Prince's Paisley Park label. Titled "Vermillion," the album features an unreleased tune by Prince, "New Telephone," as well as background vocals by Wendy and Lisa, formerly of the Revolution.

It's A Jane's World   (partial recording)