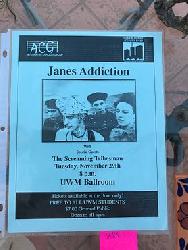 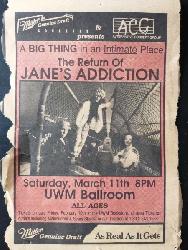 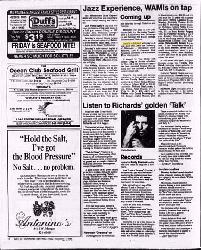 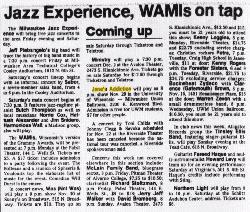 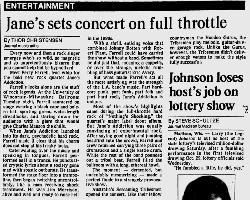 Up The Beach
Obvious
Ted, Just Admit It...
Thank You Boys
1%
Ocean Size

Chip Away (not Found On The Recording)

The Screaming Tribesmen opened.  Tickets were free for UWM students.

Decent quality audience recording. Unfortunately, the recording in circulation is only about a third of the show (22:47). "Up The Beach" has the first half cut off. It was recorded by the same taper whose recording of 11/25/88 Chicago became one of the most popular Jane's bootlegs, and he used this edited recording as filler on the 11/25/88 tapes he traded out. He titled it "Shock Milwaukee" (complementing the 11/25/88 recording which he titled "Shock Chicago").  This version of "Ocean Size" (featuring an elongated intro by Dave) has been released on the bootleg CDs Paraphernalia and Addicted.

Every now and then a rock singer emerges who's so wild, so magnetic and so unpretentiously bizarre that you cannot help but be hypnotized.

Farrell's looks alone are the stuff of rock legends. At the University of Wisconsin-Milwaukee Ballroom Tuesday night, Farrell sauntered on stage wearing a black cape and bolero hat, sporting green, waist-length dreadlocks, and staring down the audience with a glare that would give Charles Manson the chills.

When Jane's Addiction launched into its dark, psychedelic hard rock, Farrell made it clear that his charm does not stop at his freaky looks.

Caterwauling over the music and speaking in tongues, Farrell performed as if in a trance. He punctuated cryptic lyrics about a society gone made with spastic outbursts. He transformed the stage floor into a trampoline, then began twitching uncontrollably, like a man receiving shock treatment. He was Jim Morrison, alive and well and ready to raise hell in the 1990s.

While a shrill, enticing voice that combined Johnny Rotten with Robert Plant, Farrell could have carried the show without a band. Sometimes he did just that, moaning a cappella, or over the strange, melodic rumbling of bass guitarist Eric Avery.

But what made Farrell's act all the more satisfying was the strength of the L.A. band's music. Part hardcore punk, park funk, park fold and park hard rock, Jane's Addiction is unique.

Most of the show's highlights came during the full-throttle hard rock of "Nothing's Shocking," the quartet's major label debut album. But Jane's Addiction was equally convincing at experimental rock. After saying good night and jumping headfirst into the crowd, Farrell and crew returned carrying three pairs of drumsticks and a single kettle drum. While the rest of the band pounded out a tribal beat, Farrell filled the ballroom with a long, ethereal howl.

The moment - demented, but undeniably mesmerizing - made a perfect finale to a strangely provocative show.

Australia's Screaming Tribesmen opened the concert. Like their fellow countrymen the Hoodoo Gurus, the Tribesmen play melodic, guitar-driven garage rock. Unlike the Gurus, however, the Tribesmen didn't deliver enough venom to make the style fully successful.