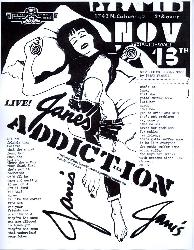 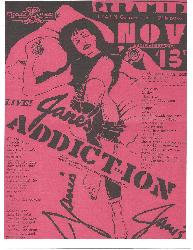 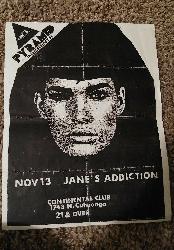 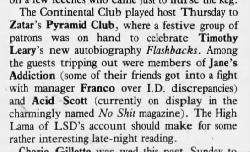 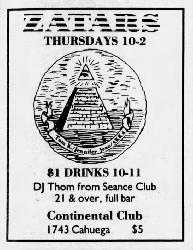 There are two versions of this recording, both sourced from the soundboard. The version commonly found on mass-produced bootleg CDs (such as Live & Profane and Live Too) is A+ quality, but omits "Slow Divers", "Jane Says", "Summertime Rolls", and some between-song banter. There is a more complete version (43:39), said to be taken from Dave's personal tape, but is lesser quality (tape hiss and occasionally choppy). This version, while more complete than the cleaner version, is still missing the first minute or so of "Slow Divers" and a few minutes off the ending of "Summertime Rolls" (cutting after about 2 and a half minutes). "Ocean Size", the final song of the night (according to a published live review), isn't included on any known recording.
A "collage" version of the show was made, using the best recordings available to form the highest quality / most complete recording possible.

The track "Whores" from this recording was included on the Kettle Whistle rarities album.

On the silver bootleg CD versions, 4 additional songs are included after "Mountain Song" (No One's Leaving, Then She Did, Ted, Just Admit It, and Ocean Size). These songs are not from the Pyramid '86 show, but rather a different unknown show, likely from the Fall '87 tour opening for Love & Rockets. 11/27/1987 Dallas, TX, Arcadia Theater, perhaps.

Like some other shows from '86 and '87, the band opens with a short acoustic set ("Slow Divers", "My Time", "Jane Says") featuring Eric on rhythm guitar.

Dave plays keyboard on "Slow Divers". This version of the song has been bootlegged on a 7" as well as a silver bootleg CD, both titled Whole Lotta Love. There are 2 known live recordings of "Slow Divers"; one where Perry sings "you got a joint to sell me?" and the other where Perry sings "you got some dope to sell me?" The "joint" version is from 1/26/87 Roxy (and was officially released with overdubs on Kettle Whistle). The "some dope" version is from 11/13/86 Pyramid Club.

This is the earliest known live-on-stage recording of "Jane Says". Perry introduces it by saying, "Here's one we haven't done in a long time."

"This is my new friend Roxy. Ain't that honey swell? Get into it, Roxy. Come on, baby."

"Thank you all. Thank the Pyramid. It's a good club. You guys should check it out sometime when you're in Hollywood. Except for the owner. The owner's a bald-headed dick. But we love the Pyramid people. But if you see a bald-headed fucker walking around here with a bad attitude, you'll know who I'm talking about."

(before "Summertime Rolls")
"I hope you've all done a lot of drugs, as we all have. Because then you'll think we're good and come to our next show. And we could stay alive. We don't have a place to play next, so if anybody's got a cool backyard, we're up for parties."

(at the start of "Summertime Rolls")
"This is about the season that fell. Sometimes you gotta fall."

(poetry improv in "Summertime Rolls")
"Well, I don't lie. And some say that that's a lie. I don't deny."

Here's one local band, which could unite a number of this town's disparate youth tribes. The name implies wan-skinned, arrhythmic noise but the music is really a muscular, combustible mixture of headslamming heavy metal guitar, roaring funk rhythms, and dreamy psychedelia-all topped off with Perry Farrell's Robert Plant-style, banshee in a gale storm wail. At their best, Jane's Addiction bring to mind some noisy union of Led Zeppelin, Killing Joke, and the Red Hot Chili Peppers. Bassist Eric Avery and drummer Steve Perkins provide a thundering bottom for Farrell and guitarist Dave Navarro's psycho-metal excursions. The problem is that when Jane's Addiction stop their full court press and decide to indulge in a whiter shade of pale, the band loses its focus and lapses into the self-indulgent. The first three songs in their set, "Slow Divers," "My Time," and "Jane Says" are a case in point. While their moody edginess lent some drama, they dragged on far too long. It wasn't until mid-set, with "I Love The Whores," that Jane's Addiction locked into a steamroller metal/funk groove. Granted, they don't write songs as such-with all the choruses, verses, harmonies, and melodies that label implies-but their earth trembling fusion can be so intoxicating, as on "Mountain Song" and the closing "Ocean Size," that it's hard not to be impressed.
--Cary Darling

Thanks go out to SDW for the recording info.