The following is an article from NO MAG issue #12, which we have an estimated publication date of spring 1984.  The transcription below contains all typos found in the article itself.

PSICOM: WE READ ALOT AND WE ENJOY OUTER SPACE
by Bruce Kalberg

STICKING TO THE SUBJECT: Who is the sticky one, the interviewer or the subject? It’s you, you’re all sticky!  If you’re under the impression that there is nothing new under the dirty brown L.A. soleil, try PSICOM.  (It’ll take that sticky stuff right off you).  In the past few years have you begun to fear your perverted friends, isolated yourself, taken a 9 to 5 job as self-punishment, OD’d more than once and then become a vegetarian, visited your obnoxious relatives out of familial love not duty, and have you started admiring anonymous drooling infants in the arms of strangers inside Zody’s department store, entirely stopped cheating on your lover in every shadow, bar and bathroom in town? (You get 1 minute to think about it.  I’ve gotta masturbate the dog, it’s 9 o’clock.  If I don’t he fucks humans.  Maybe a confused boat person out hunting housepets will eat him for me.)  You may have punched your ticket prematurely, the show isn’t over and it’s not your bedtime yet.  It’s a concrete spider web, difficult to see the entrapment suspended in your midst, and the human fly flits by in fear (buzz . . . buzz . . . stick . . . chomp!) . . . . whoops!  We lost our fly.  We can hire another one right here on the spot.  The human fly flits (buzz . . . buzz . . . buzz) from metaphoric garbage to metaphoric dogshit on and on, scared as hell and eventually becomes a prisoner of his home and repetitive patterns, ultimately dying in dull safety.  Are you clinging to a stale and safe piece of familiar dogshit out of insecurity.  Has it stopped communicating  (communicating with dogshit?) . . . STOP! STOP! What kind of literature is this?  This is the end.  It’s gotta stop . . . . . . . P.S. PSICOM is no wimp art band.  The end.  Did I tell you that they are one of the best bands in L.A.?  They are one of the best bands in L.A. or anywhere else.

PSICOM INTERVIEW:  I don’t know who the ‘Rude Slob’ speaking in this interview was, he came in with the band’s group of friends.  They seemed to know him.  Maybe they thought I knew him.  10 minutes after everyone had left (2 a.m.)  I walked by the bathroom and the door was closed like anybody was in there.  I knocked on the door and that guy ‘Rude Slob’ says “Just a minute!”  He was gonna hang out in there.  I gave him a NOMAG when he left.  He didn’t make a mess.

NOMAG:  I HAVEN’T BEEN ABLE TO DESCRIBE THE PSICOM SOUND TO ANYBODY.

PSICOM:  “That’s good.  It means we’re not following anybody.”

RUDE SLOB:  “All I heard when they played was MOTORHEAD.”

PSICOM:  “Wait a minute.  The music has reflected how we feel about the world.  It’s tender, bittersweet, angry.  So we’re just reflecting the world right now.  That is what I think true art is, a reflection of the time.  When you look back, like at German Expressionism, when the people were really impoverished looking, the art was really strong.  So we are the result of now.  That’s why you can’t pin it, but it is like the world.  It’s almost crazy, but the world is almost crazy.  It definitely goes borderline . . . it’s a fine line between sanity and insanity.”

PSICOM:  “That’s a nice way to describe it.  That’s one of the things I like about PUBLIC IMAGE.  They have that bass and then they layer the guitar and keyboards over it.”

NOMAG:  WHERE DID YOUR NAME COME FROM?

PSICOM:  “We went through 3 or 4 months of trying to find a name.  We were looking through books on movies, science fiction . . . we wrote a bunch of stuff down at one point.  We realized that we weren’t going to get a name out of that.  We started with F-Com or something.  Kommunity F Com.  First we were called THE SHERPAS.  But you know what’s cool about our name now, it’s that it’s not anything . . . . . Psi is a Greek letter, the 23rd letter, which is a mystical number, and it means ‘mind’ also in Greek.  It’s the letter in Greek of the syllables that make up ‘psyche’ and ‘psychology’ . . . . and Com = communication.  Military jargon.  Com = combat.  We were big ‘Combat’ freaks when we were kids.  Vic Morrow yeh.  You’re  gonna get yours soon and you’re gonna wish it was a helicopter.”

NOMAG:  DID YOU EVER SING BEFORE PERRY?

PERRY:  “When I started out I moved to L.A. . . . I lived in my car and I wanted to be a singer, but nobody liked me.  They thought I was too flipped out.  In fact this band almost didn’t pick me up because at the first rehearsal I just started jumping around.  They would look at one another like . . . ‘This guy is fucking nuts!’ . . . This is my first band and Marisca’s first band.  The thing is, I looked for 4 years.  It’s not like I’d never sung before and I just got up there.  I’d been practicing in my room with headphones for 4 years while looking for a band that I could related to, with people that I thought were great people.”

PSICOM:  “We had another singer before.  She’s playing keyboards in Kommunity FK now.  Margaret, she used to be the singer.  We had a different drummer then . . . It’s lucky that those people dropped out.  It’s really hart to find a combination of people who can do something like this.  It’s rare, it’s really fuckin’ rare.  I don’t know what happened but we did it.  We went through many drummers.  We were like in the pits of depression, we were despondent.  We were ready to drown our drum machine.  The people in the band are different enough so that when we came together, we didn’t get in each others way.  I’ve been in bands before and it’s never happened like that.  The combination of people has never been so good . . . . . Everybody has their own little space, and nobody ever tells the other person how to play anything.  There is no master of it.  We all read alot and we all enjoy outer space.  We’re really into space technology.”

RUDE SLOB:  “I’m going to get Mark Pauline to destroy your band.”  (Do I really have to repeat this, this far along, this late in the goddam game, even after he nearly blows himself to the moon with explosives, some of you still can’t remember who Mark Pauline is right at this moment.  He’s your long lost father the sailor who went to sea and got captured by the natives and eaten and made into candles, seat covers, rope, dog food, cat-food and perfume behind the moustached princesses waxy elephant ear.  You can’t forget your own Dad on his birthday now can you? Ed.)

PERRY:  “Well there are alot of different things.  It’s really hard even for me.  I hate alot of people.  I have to admit it.  I hate like crazy, but I love too.  Maybe it’s a personal thing but I want to try to correct the hate.  I’m writing about all that, all that fucked up thing.  I’m trying to change it and maybe that will help me change myself.  Sometimes I get real confused.”

RICH:  “I get so fucking pissed off at people.  There’s another one, mind communication.  This is kind of a fun fantasy for me.  I think that at no set time in the future, 10,000 years maybe through evolution, there will be no money and people will communicate through mind, strictly mind.” 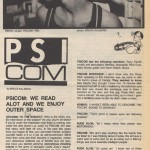 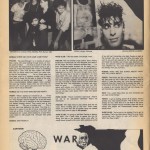